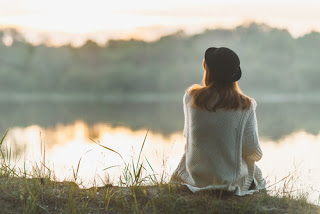 He was a fighter
But not the kind who throws punches
More the type to motivate with his will to fight
He was that boy who dreamed of being on stage
Not for the fame but to inspire the next generation
He was the boy who tried and tried to teach me
Bass all the way across the sea on a tiny screen
He was that boy your parents are cautious about
But the truth is under the black hair, tattoos, and piercings
Was a man who showed and gave respect.
Who was he? He was and is my first love who I lost
Lost to this painful disease – he gave up hope too early.

She was a pre-mature baby who almost died at birth
She has a sister who was born a year and a half later
She loved to dress herself for school even though her clothes never matched
She could eat her mother’s homemade macaroni and cheese for every meal of the day
She loved going to the beach to build sand castles and cover her daddy from the neck down in sand She loved to take trips to Florida so that she could sit on Grandma’s lap – while Grandpa was in the kitchen cooking bacon
She loved summer break from school, because it meant more time to spend outside playing with neighborhood friends
She became a cheerleader in Jr. High
She got her first boyfriend, he was a wrestler
She experienced her first heartbreak and saw how it made her stronger
She had a beautiful childhood.
She grew up to be an alcoholic.
She is me.

He was a son.
He was a brother and his brother was his best friend.
He grew up playing every sport, but basketball was his favorite.
His act of teenage rebellion was to get a hot pink Fight Club tattoo on his shoulder.
He played Polo (on horses) in Santa Barbara
His favorite place was his family’s cabin in the mountains of Colorado.
He was a true cowboy at heart.
He loved to fly fish and hunt.
He loved Star Wars and cartoons.
He believed that God was a Broncos fan because the sunset is always orange and blue.
He fell in love under the stars in a middle school courtyard in Arizona.
He knew she was the one when we saw her get an extra slice of pizza at a social event.
He was 6’4 and she was only 5”.
He would watch the same shows and listen to the same songs over and over again just to make her happy and smile.
He was amazing with kids and wanted to be a pediatric doctor.
He proposed to his fiancée three times so that everyone from his and her family could be part of the special moment.
He was ready to start a family with her and would have made an amazing father.
He was a Heroin addict.
He died this week of an overdose.
He was my fiancée.

She was a daughter.
She was graceful.
She was beautiful.
She was loved beyond words.
She was stronger than anyone I knew.
She was determined.
She could find beauty in everything.
She brightened my day & everyone else’s she met.
She loved to paint.
She loved to sing.
She loved music.
Her passion was doing hair & the salon was her favorite place to be.
She loved her family.
She held me up when I couldn’t do it on my own.
She was a heroin addict.
She was my best friend. (Rest in Peace, Adri, I love & miss you so much.)

He was born July 3
He was a precious little boy
He was his mom’s only son
He was someone’s grandson
He had a Mom and a Dad
He was an older brother to his sisters and new baby brother.
He loved to play football and wrestle.
He loved to work out and lift.
His favorite color was yellow.
He smiled and laughed a lot.
He was the sweetest creature on this Earth.
He would give the shirt off his back.
He would walk or drive miles to save you.
He was so loving and kind.
He was the strongest person I knew.
He adored his family and friends.
He loved music and Kanye West
He was always there for me no matter what.
He was a talented handsome man.
He always put everyone else first.
He would make your whole day.
His soul was perfect.
He was taken before his time.
He was the love of my life.
He was an addict

She was born innocent and pure.
She loved to make her older brother laugh and they overflowed the bathtub with bubbles every time. She protects her brothers from harm.
She fights bullying and stands up for the underdogs.
She has since elementary school.
She learned to play piano and she sings every chance she gets.
She loved her gymnastic class and soccer team.
She makes friends wherever she goes and loves everyone around her.
She loves every animal, but especially dogs.
She fights for equality.
She works hard at whatever she does.
She loves Halloween and scary movies.
She traveled the world with strangers and left her heart in Barcelona.
She is fascinated with marble statues.
She loves music, but she hates country.
She loves her family with all her heart.
She is creative, artistic, and loves to write poems.
She sees the beauty in the world and talks to the moon, sun, and the stars.
She got her EMT certification at 17 years old.
She cried when she saw fireflies the first time when she was 18.
She dreams big dream.
She fights depression every day.
She is a drug addict.
And she is me.

She taught herself how to play the piano at age 12.
She was the captain of her High School Swim Team.
She is a Certified Nursing Assistant.
She loves helping the elderly.
Some may say she’s one of the most intelligent people they know.
She helped build a church in Haiti when she was 16.
She is an artist.
She sings at the top of her lungs in the shower.
She writes poetry to express what’s in her heart.
She held her grandma’s hand as she took her last breath.
When she was little, she loved building snowmen for her parents to see.
She was a ballerina for 10 years of her life.
When she laughs, my heart dances.
She loves to love.
She is a drug addict.
She is ME.

He was the one who recognized the injustice of the place I was committed to when I was only 13 years old and held in for 33 months.

When everyone else said I should be left there – he said no, enough is enough.

He picked me up two days before Christmas.

It was the best day of my life.

He has a warm smile and the best sense of humor.

He got me a 76 El Camino for my first car, because it was built like a tank and he knew it would be safe.

No matter what I would get myself into I knew I could call him when I needed help with something.

He would be there, even if that meant driving to Phoenix from Tucson to take me to appointments and to complete tasks that were tedious and boring.

He is kind and intelligent, outgoing and driven.

He cares about health and knows about new breakthroughs in the holistic medical field.

He is an amazing grandfather and dad

He is a meth addict

He held me in his arms for the first time when he was four years old.
He climbed tall trees and looked for rocks in the ditch.
He watched Mary Poppins on repeat.
He danced and spun around with me to The Eagles.
He hid me in his closet from a raging father.
He played baseball to make his father proud.
He hugged me in the halls of elementary school.
He jumped in puddles when the rain had poured.
He got bullied for being small.
He went to high school and became silent.
He had friends over to have Dragon Ball Z marathons.
He had a girlfriend who smashed his car mirror.
He went to a private Christian college.
He felt alone.
He moved back home and spoke again.
He watched documentaries about strange but interesting things.
He introduced me to new and fascinating movies and music.
He was always there for me.
He took the most beautiful, captivating pictures.
He wrote the most mesmerizing poems.
He is an addict.
He is my brother.

She pouts when she’s mad then laughs at herself
She gets mad at me, then asks me to be friends again.
She dances in the rain and splash in the puddles
She is graceful and beautiful but doesn’t know it yet
She sings out loud even when she doesn’t know the words
She cries at everything – happy and sad.
She loves every dog she sees.
She calls all dogs baby.
She misses her ex boyfriend every night.
She has played hockey since she was little, but looks like a super model
She is loud and fun and loves to play cards
She is small but mighty
She love musicals and sing them out loud randomly
She loves Halloween and scary movies
She always asks if I’m ok even when she is falling apart
She uses silly voices to make me laugh
She is artistic and creative and quick witted and hilarious
We love our kids with everything we have
She’s always there when I need her
She has an autistic daughter
She saves people’s lives
She grew up in Egypt
She gives people second chances
She prays and listens to Christian rock as loud as she can
She cooks, she travels, she scuba dives
She trains horses
She speaks Arabic and wants to join the military
She loves the stars
She has amazing tattoos that have actual meaning
She’s lost someone close to the disease of addiction
We are spiritual, we miss our families
We have hopes and dreams
We have integrity and pride
These are my best friends…
They are addicts and alcoholics and so I am…
And we deserve to live ……

« Personal Thoughts, Stories & Reflections From People In Early Recovery: Part 9
What Is Adventure Therapy? »
Back to Blog