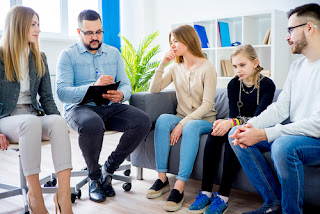 Family therapy is a relatively new form of treatment, first introduced in the 1950’s. Based on the assumption that psychological issues are the result of unhealthy interactions with others, Freud’s psychoanalysis and Roger’s client-centered therapy launched individual therapy in a whole new direction that included the influence of familial relationships, eventually giving birth to family therapy (Nichols, 2017). Carl Rogers believed that individuals are born with the innate drive towards self-actualization, but this drive is subverted by the desire for approval, which leads to conflict (Nichols, 2017). Actual founders and significant pioneers of family therapy are among Virginia Satir, Carl Whitaker, Jay Haley, Lyman Wynne, Ivan Boszormenyi-Nagy, and Salvador Minuchin (Nichols, 2017).

In working with families or individuals, therapists will at times encounter situations that involve domestic violence and/or sexual abuse. If the therapist has any suspicion of abuse of children, the elderly, or any vulnerable population, the therapist has a “duty to warn,” or a duty to report these suspicions to the appropriate authorities immediately.

In assessing a family for treatment, the therapist should be mindful of culture, as well as how assumptions related to culture may be driving forces behind some of their problems, particularly when it comes to gender roles and assignments (Nichols, 2017). If working with a culture outside of their own, the therapist would best serve their clients by developing cultural sensitivity, through educating themselves as to the experience and traditions of that culture (Nichols, 2017).

The first interview of the family is aimed at developing a hypothesis of the contributing factors of the presenting problem, as well as building a therapeutic alliance (Nichols, 2017). In the early phase of treatment, major conflicts will be identified, the hypothesis will be refined, and family members will be challenged to identify their own roles in the family problems. When one person is presented as the specific problem, the family therapist will challenge the linear thinking by finding out how other people are involved, and what roles they may have played in the manifestation of the problem (Nichols, 2017). In this phase, it is important for the therapist to be aware of both process and content, for as much can be learned by how people talk to one another, as can be learned by the content of the message (Nichols, 2017).

The middle phase of treatment will be aimed around helping family members develop more constructive ways to interact with one another. Here, the therapist will take a less active, observant role and encourage interaction amongst family members. This helps family members learn to use their own resources to work together, rather than relying solely on the therapist (Nichols, 2017). Once the presenting problem has improved, the family understands what was and wasn’t working, and has a fundamental knowledge of how to avoid similar problems in the future, the therapy may be successfully completed (Nichols, 2017).

Family therapists tend to think in terms of circular causality, rather than linear causality, by examining the interactive cycles of relationships. Instead of thinking solely in terms of cause and event (linear thinking), family therapists consider the influence people have on one another in a cyclical focus (Nichols, 2017). It is truly a dynamic process that looks beyond personalities to patterns that connect them and how family problems may be a product of the relationships that surround them (Nichols, 2017).